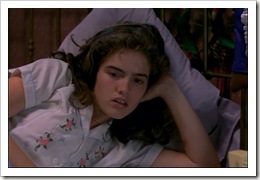 Heather Langenkamp (born July 17, 1964) is an American film and television actress. She is best known for her part as Nancy Thompson from the A Nightmare on Elm Street films. In 2010, she and many other of the Nightmare series alumni appeared in the documentary Never Sleep Again: The Elm Street Legacy.

Such a brilliant movie, I even bought the gloves from the states, was my pride and joy for a while and they are somewhere in a box in the attic waiting…

This is just such filthy phone sex, I love it 🙂

And since Johnny Depp was also in the movie, he does deserve a little picture here as well.