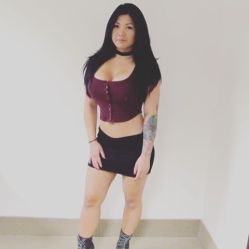 We most certainly wouldn’t mind being shamelessly devoted to the luscious Suteara Vaughn who is enticing viewers on television this week. She has a recurring role as Ariel and in the episode ‘I Am A Storm’, Suteara works with Fiona (Emmy Rossum) to drum up business by throwing a speakeasy party at Patsy’s Pies. Emmy gives a tour-de-force performance as Fiona who has descended into jadedness. Perhaps preparations for the party could lift her spirits and as Ariel there’s will be more of the foxy Suteara to fawn over in future episodes too. Suteara made a positive impression in her scenes with Emmy and she has the budding talents to dazzle this industry. She’s already usurping two stereotypes on TV, that of being curvier and not stick skinny as well as being cast as an Asian American character on a hit show. We did lose a beloved one on “The Walking Dead” but perhaps they could cast Suteara one day. Another strong women on that series should stir things up even more!