​About time for some sexy smoking girls. And also for new readers, just a quick recap what smoking fetish is.

Another cultural source for the fetish may be eroticized depictions of women who smoke that come from older motion pictures, especially from the film noir era.

Men also enjoy seeing the smoke pouring from the woman’s mouth or nostrils. Thats my own personal favourite. 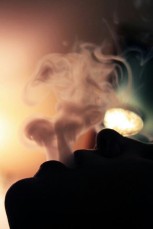 And if you want to see more click here..