Today is the Swedish National day, so Swedes everywhere are out drinking, eating, singing and dancing. The drinking is especially important since we can’t dance without it.

This is really important people, look at the map… quite a huge gap between Sweden and Switzerland so don’t ask me about chocolate or clocks ok! 🙂

Sweden is the biggest country of Northern Europe and the fifth of whole Europe, but the population is just 9 million.

Last but not least, there are no polar bears walking the streets and Swedes normally do not have names such as Helga, Olga and Björn.

<— Ingrid Bergman, gorgeous as ever

<— This beautiful girl is Astrid Lindgren, my all time favourite author of Pippi Longstocking, Barnen I Bullerbyn, Ronja Rovardotter and more…

And of course Greta Garbo, one of the most famous Swedes around.

And now for what you have been waiting for 🙂 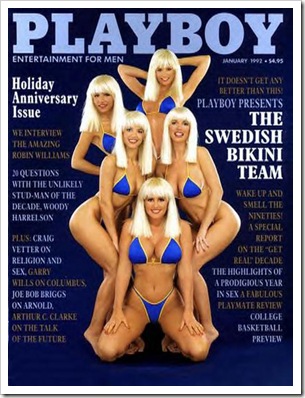 And the myth about the Swedish Bikini Team, they are not from Sweden at all, sorry guys… they are from the states….

A post about sweden without our lovely Victoria Silverstedt can’t be done:

This is actually me in all my glory enjoying my schnapps and herring today.